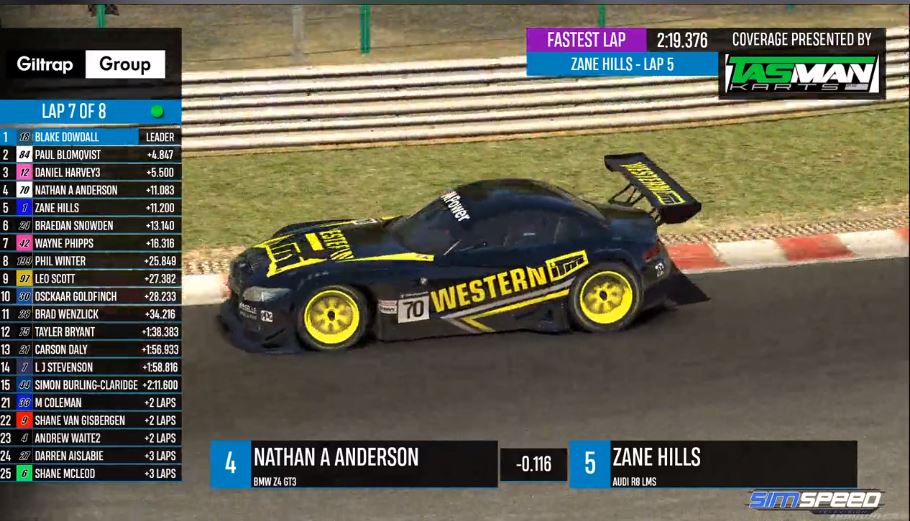 Kiwi Supercars champion and acknowledged Sim specialist Shane Van Gisbergen qualified quickest and won the first and second races of the evening. But in the third and final 8-lap race at the second Tasman Kart Supplies-backed KartSport New Zealand/SIMSpeedTV-hosted GT3 class iKartSport Racing ‘Chocolate Fish’ event at a virtual Circuti de Spa-Francorchamps in ‘Belgium’ on Tuesday it was 12-year-old Blake Dowdall who won the third race,

He did it in style too; after Van Gisbergen was taken out by a spinning back marker on the 4th lap Palmerston North schoolboy Dowdall drove the race of his young life to wrestle the race lead off fellow young gun Nathan Anderson from west Auckland then ease away to claim an impressive win over fellow schoolboy Jaxon Harvey from Dunedin and hard charging Auckland kart racer and SIM specialist Zane Hills.

To his credit, Van Gisbergen, probably the only driver in the virtual field to have raced a real car around the famed F1 and WEC road course circuit, was a cut above everyone else in the field in qualifying and the first two races

In the first he led from start to finish, with a winning margin over the battling trio of Nathan Anderson, Cameron Freeman from Dunedin and Braedan Snowden from Whangarei of close to half a minute.

Van Gisbergen also won the second – full reverse grid – 8-lap race despite starting it from the back row, albeit this time by a margin of less than a second over Aucklander Paul Blomqvist with Brad Wenzlick from Thames in third and Blake Dowdall fourth.

With two wins from two starts Van Gisbergen was back on pole for the final 8-lap race of the evening but the 30-year-old Kiwi Supercars ace was baulked just after the start and was shuffled down the order to 8th. He was back up to P4 on the 4th lap and was fast closing on a three-way battle for the lead involving Dowdall, Jaxon Harvey and Nathan Anderson….only to clip a spinning car and spear off the track and out of the race. 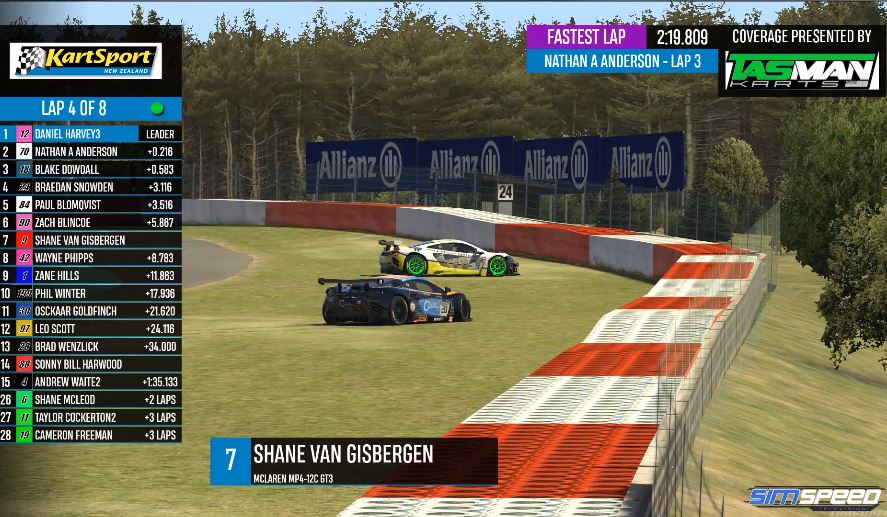 Pic 2:  Special guest, Shane Van Gisbergen, qualified quickest and won the first tow race but crashed out of the third when he clipped a spinning backmarker.

Amateurs get shot at professionals in Speedcafe.com ESeries

Any cookies that may not be particularly necessary for the website to function and is used specifically to collect user personal data via analytics, ads, other embedded contents are termed as non-necessary cookies. It is mandatory to procure user consent prior to running these cookies on your website.